This is another oldie but a goodie! This was from my time at Region 12. However, there is much to be learned. Read on for some Writer’s Workshop in Troy Texas…

I spent the morning in Kindergarten today! I was greeted with many hugs and smiles and looks of awe! There is nothing like a visit to Kindergarten to make you feel like a SUPERSTAR! Some little girl didn’t even know my name yet, but she ran over and said “I made this for you”. She proceeded to hand me a piece of paper that had been colored on. I took it with a reaction that showed what a treasure I believed it to be and proceeded to back it with tape and wear it on my shirt for the duration of my visit. It is now inside my Writer’s Notebook.

Shortly after my arrival it was time for the Writer’s Group Meeting where I was introduced to the class as Mrs. Sommers’s teacher!  Make note of time number two that I felt like a SUPERSTAR!  Mrs. Sommers was showing the class her Writer’s Notebook and I couldn’t help it- I went and retrieved my own from the bag I brought in… SUPERSTAR episode 3.  Students were finishing up letters to soldiers today and many who were finished would be making their photo envelopes for their ideas folder.

The first thing that became evident when I saw students leave the rug (after having turned and talked with a partner about their writing plans for the day) was that this is a classroom where WRITING TAKES PLACE! Student folders were overflowing with papers and students knew exactly what to do when writing time began. 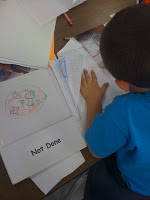 Mrs. Sommers had a list of students to confer with about their soldier letters. I am so happy to have this picture to replace the one I use of a teacher with a RED PEN in her hand. Rhonda- watch out- your picture is going to be part of my powerpoints now. Look how intent she is! Look how focused on that student! What a gift she is giving her writers- her full attention! I let her work as normal, and I pulled in close to some writers. Unfortunately names are escaping me so another description will have to do. I sat down next to a gentleman with the cutest squishy cheeks you ever did see! He was writing a story called Me and Scrappy.  Little did I know that Scrappy is a frequently chosen topic.  His story read…
Me and Scrappy
Me and Scrappy
He rides in the car because my mom picks him up.
Yes.. that is where the story ended.  I settled in as a listener first. And I said… who is Scrappy?! He said, “My dog!” Oh… I explained to him that I had no idea who Scrappy was (everyone in the class knew, but not me).  I asked him if Scrappy was his Uncle? He laughed. “NO”  I asked if Scrappy was his brother… “NO”.  His classmates piped in and said, “It’s his DOG!” OK. “Where did you write that?” I asked the cute squishy cheeked gentleman.  We worked out a new opening sentence. “Scrappy is my dog. I am his daddy.” The second part the student came up with all on his own.

Next I asked him to tell me more about his dog. He told a story about Scrappy and the fence, Scrappy and the bed, Scrappy and how he jumps on him. I looked at this writer and explained that he had not written any of that down on paper. He shook his head and assured me that he had. “I don’t see it!” I said looking at the paper in front of me.  He started digging in his folder and sure enough- he pulled out not one, not two, but FOUR other stories about Scrappy. And he HAD in fact written those things in those stories. Turns out, my conference should have been about more ideas for story topics with this little guy. 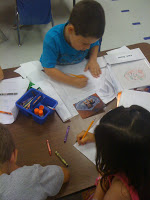 I spent a little time with Andrew. Very quiet and soft spoken. When I sat down next to him, his eyes got all big and his face blushed a little. “ME? You want to talk to ME?”, he seemed to be saying.  Andrew was just getting ready to start writing a new story. “About what?” I asked him. “About when my mommy gets the baby out of her belly!” Ah… Kindergartners have such a way with words! They are even funnier with their illustrations of such things!  He explained that his mommy is having a baby- a baby brother.  I asked questions to try and get his mind going with what could make a good story.  I left him to work.

When I came back, he had his folder closed and was working on his picture envelope. “Are you done with that story?” I asked.  He shook his head yes. “Well let me see!” I said. His story read:
I am happy my mom is having a baby.

Yes folks- that was IT!  I shook my head.. I scratched my temple… I looked on the back of the paper? I asked “Is that it?” He looked surprised to be called out on the table. “You didn’t write about how you are going to help him learn to read like we talked about. You didn’t write about how you don’t want to change his stinky diapers like we talked about?” He started to smile. “I don’t think you are done.” I said.  He got his pencil back in his hand and he continued to write! When I left he had it on the NOT DONE side of his folder to keep adding more details to tomorrow! Praise God! 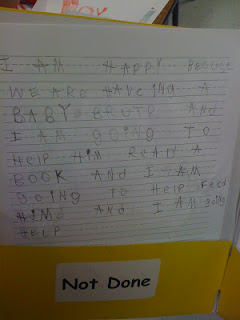 Alas it was time to get on the road to Waco. I began packing up.  Over came a sweet cherub whose name I never did get.  She had been writing about her Calico cat that day.  She opened with…
“Can I ask you a question?”
I should have known not to allow that from a Kindergarten student I had just met, but I said,
“Sure!”
“Are you pregnant?” she asked. I know my eyes got large, I swallowed my pride, and instantly sucked in my (slimmer than it was last year this time) stomach and said, “No dear, I am not pregnant.” She continued to stare at my belly a few more seconds… she may make a good Nancy Drew someday, examining the clues.

Thank you Kindergarten for a NON SUPERSTAR sendoff.  I will reconsider this outfit more carefully before wearing it again in the future and I will admit, I have been holding in my stomach ever since.