The more I work with early childhood teachers, the more I realize that the question of whether to write on students’ papers- otherwise known as scribing- or not to scribe- is a hot topic. Some teachers have never even thought twice about it. It is just what they do and have done for years. Well lets think about it together.

Scribing is when the teacher writes down for a child what their writing says.  Typically done in early childhood classrooms where children are writing in journals on a topic given to them by the teacher.  If I try to envision this classroom dynamic- I see a class full of students who are all through drawing their pictures and are now waiting for the teacher to get to their writing to add their words.  I also see the teacher frantically running around the room trying to get to every student’s paper so as to scribe their words for them.

I think many scribe thinking they are teaching something by doing it. Perhaps one thinks that they are teaching, “What I say, I can write down.” While I understand the idea behind that- the point of student writing is THEY write it down what they want to say and I argue that there are so many other parts of the Balanced Literacy day when students are learning that concept.  When are they going to learn that what THEY want to say, THEY can write down?

I have never scribed for students, but it was when I read the work of Matt Glover that my philosophy as to why I don’t and never will was solidified.

Why Students Should Do their Own Writing…
q If a child can’t read conventional writing, then the conventional writing that an adult writes in his book does not help him read what he has written.
q If an adult is doing the writing for a child, then we have no idea what kind of writing that child can do on her own.  And if we don’t know what a child can do on their own, then we don’t know what to teach him/her.
q If adults are writing for a child, we run the risk of jumping ahead of a child in developmental stages.  For most young writers, conventional spelling is a large push forward, rather than a small nudge.
And in my opinion, the BIGGEST reason of all…
q If adults write for children, we are sending the message that children aren’t really writers, that only adults can do the real writing work.  If we truly believe children are writers, we shouldn’t send a mixed message that tells them they are writers, but not really! 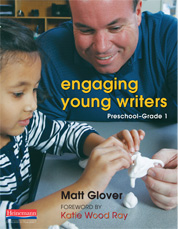 There are of course times when writing down what a student said their story “says” IS necessary.  They may have made some sound symbol connections, used a high frequency word etc. And let’s be honest, if I don’t write it down, I’ll never remember three weeks later (even three hours for that matter) the message their print conveys.

So, on occasion, I will write the words on the students page, but I’m crafty about it. I don’t say, “I’m going to write down what your writing says.” Rather, I say, “I’m going to make some notes so I can remember what we talked about today.”  It has a different feeling and it is communicating a different idea all together. Students still believe they are the writer- and they are! I just have a bad memory and need to make some notes on their page.

So you decide- do you want to keep running around the room to scribe? Or would you rather encourage students to think through their own writing, holding the pencil, and doing the work of a writer while you encourage them to learn that what THEY say, THEY can write down?