So once again, I am amazed that it is time for Currently again, and sadly there have been very few Blog posts (if any) since my last Currently post, but I have a real excuse this time! I moved across the country- yep- you heard me! I am back living in the GREAT STATE of TEXAS!  Many cherished memories of DC, but Texas is HOME! We have two homes, Michigan (our childhood home) and Texas (our adult life home).  So I’m a little late with Currently, because we just got Internet (and cable, and phones, and electricity) hooked up a few days ago!

So… let’s get to it! Thanks Farley for this new Currently. 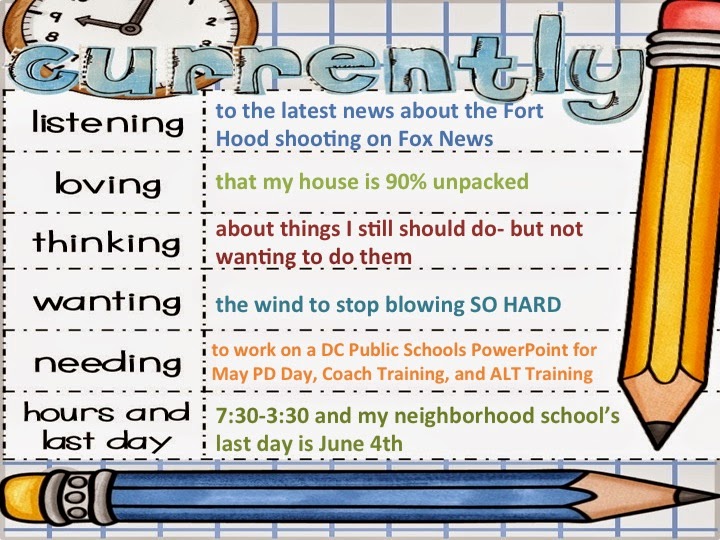 Listening: Ft. Hood is our post. Ft. Hood is where Jeff works. Ft. Hood is the post we moved back to from DC! And a few days after our arrival- there is another shooting. I say another, because there was a terrorist shooting in 2009 at Ft. Hood when we lived here before.  It is horrible! It is horrible that my husband can’t go to work and be safe and in fact is just as at risk on his Army post than when deployed to Iraq or Afghanistan. There is no excuse. This is not a gun rights issue. It’s not a mental health debate and it’s not a concealed weapons conversation.  It’s just sad and I am sick of people who have personal agendas weighing in on the situation.  Prayers for the families, prayers for the community, and prayers for the soldiers who won’t talk about how very much this bothers them.

Loving: If there were awards among Army Wives for the fastest unpack- I think I would get it! It does help that we have moved back into a house we have lived in before- but I had this bad boy unpacked in less than a week. There is not a single box remaining in my house. The garage is another story, but that’s Jeff’s gig.  I’ve even taken all of the boxes to the recycling drop off center. If feels good, but now there is nothing to stop me from doing all the other work that is waiting for me. See NEEDING below.

Thinking: There are of course little things still on the list of “to-dos”, but I don’t want to do them. I went through such a period of industrial work- 6AM-11PM days of unpacking and now I think I’m being lazy.  It’s such an odd feeling for me, but it’s not the end of the world.

Wanting: So most of you know, Jeff and I have a boat. That boat has a slip at a marina, but has been parked in front of our house (the neighbors LOVE us) since we arrived in the state because it has been too stinking windy to launch it! Every day we check the forecast, and every day we say, maybe tomorrow! Sorry neighbors. And sorry for us, if it’s not in the water, we can’t be on it, which means we can’t be at the sandbar, and I really WANT to be at the sandbar.

Needing: SO much I need to do. BOO! Again, see above, I’m in a lazy mode! Monday- on Monday I’ll start being a hard worker again!

Hours and Last Day: I used to love the hours of my school day when I was a teacher.  I was there early- and still out in time to run some errands before dinner time! Or go participate in Happy Hour with my friends.  Once school lets out for the summer, I start my BUSY season! So… no rush summer. I’m going to enjoy my April and May, thanks!